Our server was attacked tonight in an unrelenting series of failed log-ins, xmlprc attacks and other hacking attempts.  At the same time, specific information from this page was lifted and copied, and even done so in the same order! Let’s compare:

Ours:   “…Gravitt et al v. Mentor, passed preemption twice, first in January and then in June 2018.”
Theirs: “…Gravitt versus Mentor Case Number #1:2017cv05428 passed preemption twice in January 2018 and then again in June 2018.”
Ours:   “…BIA-ALCL commenced in 2018 and are continuing to be filed.”
Theirs: “…BIA-ALCL cases commenced and they are being filed on an ongoing basis.”
Ours:   “In January 2019, two Canadian law firms requested to file a potential class action lawsuit against three breast manufactures (Allergan, Mentor, and Ideal)…”
Theirs: “…in early 2019 two Canadian lawfirms requested to file class action lawsuits against three textured implant manufacturers selling implant in Canada Mentor, Allergan and Ideal…”
Ours:   “…another Canadian law firm has commenced a potential class action against Mentor MemoryGel Silicone Breast Implants.”
Theirs: “…another Canadian lawfirm filed a request for a potential class action against Mentor silicone for systemic symptoms caused by silicone breast implants.”
Ours:   “Allergan responded with a global recall of silicone and saline textured breast implants and tissue expanders. This comes after more cases of BIA-ALCL have been reported. Class actions are being filed worldwide against Allergan textured breast implants including in the US, Canada, and Korea.”
Theirs: “Lately since Allergan has pulled their textured implants from the U.S. market, ther [sic] class actions against Allergan textured implants are underway in U.S. and even Korea.”

Interestingly, the other website’s Lawsuit page had not even been updated once since February 3, 2019 until October 5, 2019. Additionally, the copycat page fails to include supporting research substantiating the information set forth.

Theirs – this is a screenshot of what the copycat posted on October 5, 2019, just in case she changes it later after seeing this.

Their Sitemap, documented on September 27, 2019 shows their Lawsuits page had not been updated since February 3, 2019 (eight months prior):

Below are two examples of the 50+ attacks received today, October 5, 2019 (same day our Lawsuits introductory paragraph was similarly worded on their website):

Upon discovering our website in spring 2017, competitor began quietly copying it and then shortly later began public attacks. Two months later, on the competitor’s birthday, our website was under a DDOS attack (cyberattacks generally done by competitors). In 2019 when they upgraded their website, competitor made a separate page for tests, similar to our site.

Some of our tests and wording were copied, they later made entirely separate page for Tests like ours (their tests used to be on their Symptoms page), copied our layout (using bullet points and adding a section underneath the main tests with more tests).

Ours (March 21, 2017): “Temperature for thyroid/adrenals: check your body temperature 3 hours, 6 hours and 9 hours under the tongue after waking and get the average of the three temperatures. A healthy body has an average daily temperature of 37° C (98.6° F). Low and fluctuating levels may indicate thyroid/adrenal problems. See here for more info.”

Ours (March 21, 2017): “Ultrasound or MRI (recommended to do without contrast to avoid gadolinium toxicity) – beware of false reads, many times they don’t show gel bleed nor rupture when there actually is.

Please note, mammography can contribute to ruptures and is no longer advised for usage with breast implants in the breast implant awareness groups. Click here for a study by FDA scientists indicating that silicone or saline implants sometimes rupture when women undergo mammograms.”

Theirs (March 24, 2017): “MRI OR ULTRASOUND TO DETECT IMPLANT LEAKS/RUPTURES”

Theirs (April 29, 2017): “MRI WITHOUT GANDOLINIUM CONTRAST WHICH CAUSES TOXICITY IN US OR ULTRASOUND TO DETECT LEAKS/RUPTURES (We advise against Mammograms due to their ability to rupture breast implants)”

The Elisa/ACT lab only tests for sensitivity, not for quantity (how much of a substance is present) or antibodies. They take the white blood cells from your blood, place them in lab plate, and add the material being tested to measure lymphocyte reaction. They are not a direct access lab, you either need to go through betterlabtestsnow.com, call Elisa/ACT to find a lab nearby, or order the test through your practitioner. They can test for sensitivity to silicone, various foods, fungi/molds, chemicals, and more.”

1.  The Silicone Hypersensitivity Panel (betterlabtestsnow.com, done through elisaact.com see catalog) has existed for years and is once again gaining popularity but it should not be used to rule out breast implant illness as results vary from woman to woman and ingredients vary from implant to implant.  It is a panel of 19 items, including materials commonly used in breast implants, and related possible irritants.  Please note this test does NOT test for silicone levels within your body, only sensitivity to it.  Testing for sensitivity to: Silicone, Silicates (silicon dioxide), Polyvinylpyrrolidone, Tin/stannous chloride, Titanium dioxide, Petroleum byproducts of Xylene, Toluene, Benzene, Latex, Phenol, Formaldehyde, Vinyl chloride, Green #5, Blue #2, Violet #2, Aspergillus niger, Candida albicans, Aluminum.”

(Competitor did not list a section called “Other Tests” until she discovered ours and began a similar section.) 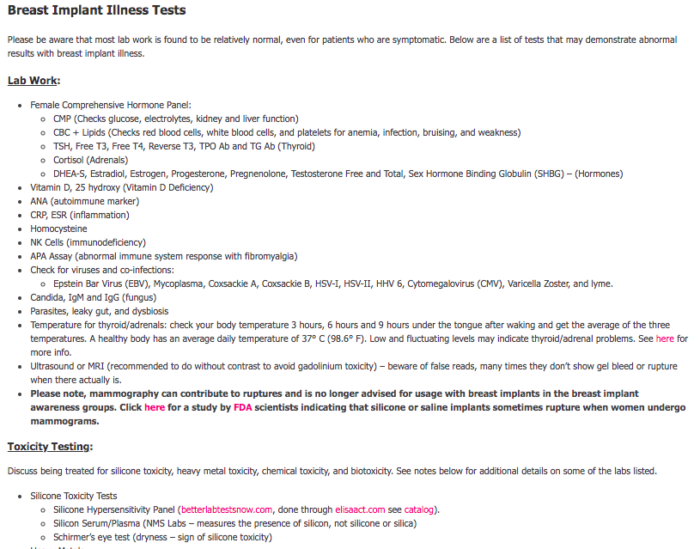 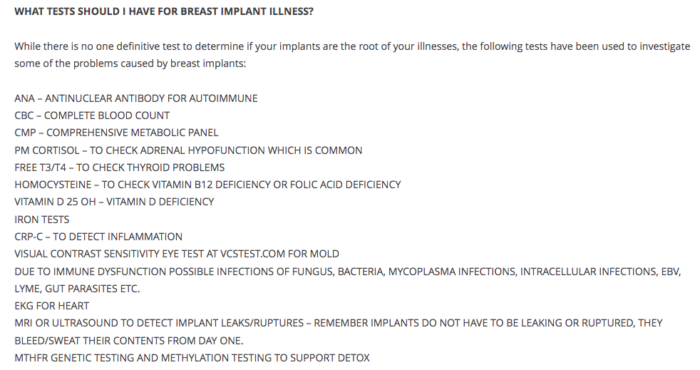 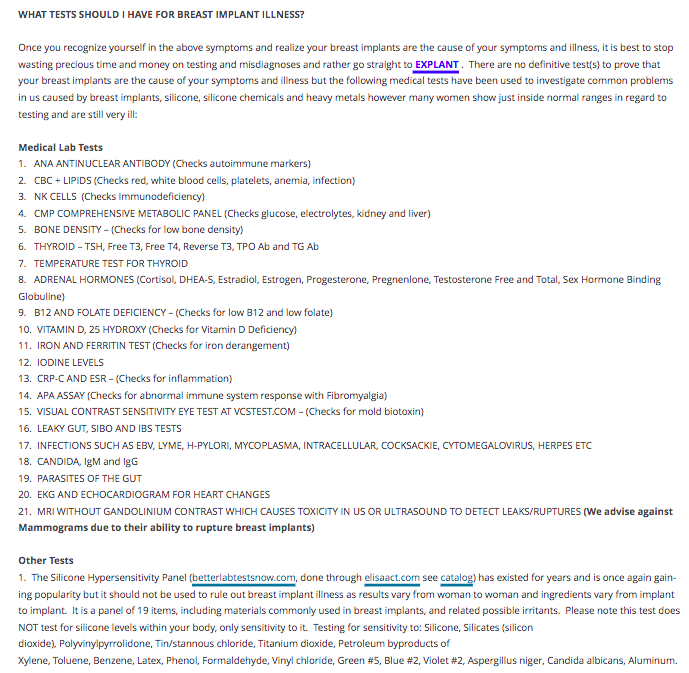 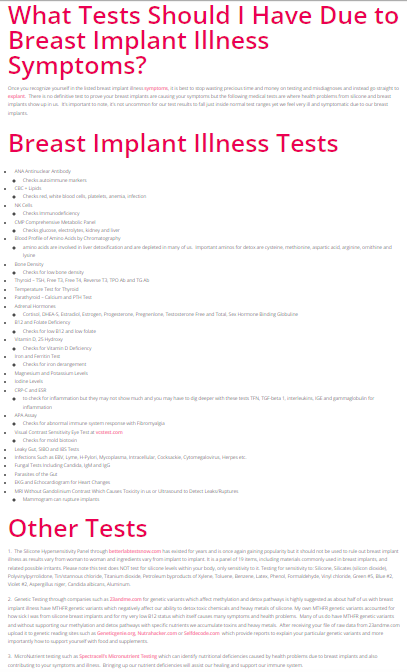 On our Lawsuit page, a section on Medical Device Safety Act H.R. 2164 was published on December 15, 2017.
Almost a year later, on November 15, 2018, the copycat made a similar section on her Lawsuit page.  They reversed the order of the two paragraphs, but essentially put the same content (sentences/concepts following the same order and the same words incorporated).
Examples:

Ours (December 15, 2017):   “Breast implants are categorized as Class III medical devices … and are very difficult to sue due to the 2008 Supreme Court case, Riegel v Medtronic which gave broad federal protection to manufacturers.”

Theirs (November 15, 2018): “…breast implants are Class III medical devices and are protected by preemption laws due to the 2008 Supreme Court case Riegel v Medtronic which gave broad federal protection to manufacturers”

Ours (December 15, 2017):   “citing that Class III medical devices are solely accountable to the regulations and surveillance of the FDA”

Theirs (November 15, 2018): “citing that Class III medical devices are only accountable to the regulations and surveillance of the FDA”

Theirs (November 15, 2018): “After Riegel, the only way to sue for a Class III medical device is to assert a parallel state law claim where one must prove the manufacturer deviated from a federal guideline or requirement the device was approved by, the violation of some same state law, and how that violation caused injury.”

Ours (December 15, 2017):   “Please take a short moment to sign and support the Medical Device Safety Act H.R. 2164, a bill introduced to restore an injured consumer’s rights to sue Class III medical devices that are currently being preempted by federal protection.”

Theirs (November 15, 2018): “Please sign and support the Medical Device Safety Act H.R. 2164, which restores an injured consumer’s rights to sue Class III medical devices such as breast implants and others that are currently being preempted by US federal protection.”

Note how they directly cut and pasted “Please sign and support the Medical Device Safety Act H.R. 2164“, shown by how it is bolded like ours, when nothing else on their page was bolded. They similarly reworded the second part of that sentence.

Their section on MDSA 2164, published on November 17, 2018 (two days after their initial copying; perhaps in attempt to make it look “different”).

Note how they took out one of the lines they copied of “is to assert a parallel state law claim where one must prove the manufacturer deviated from a…guideline” and in its place put a quote from an official source as to make it appear as if the information they are providing is their original research: 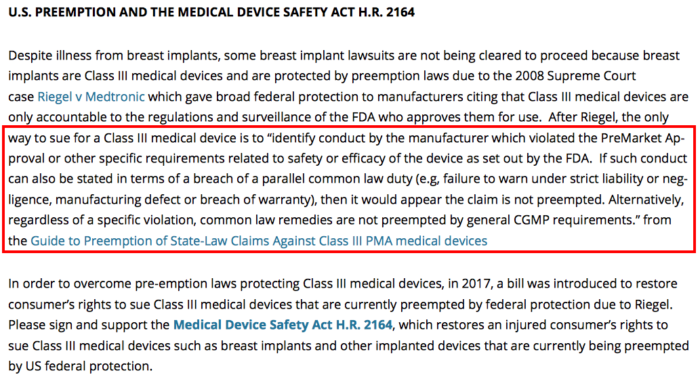 On 1/19/18 at 01:46 +00:00 their website published an updated Florida Explant Surgeons list: copying 5/6 of our first six surgeons (Barnett, Rankin, Vibhakar, Van Vliet, Rosenstein) and copying the order of our the second and third surgeons (Rankin, Dev), making our first three surgeons listed appear the same. 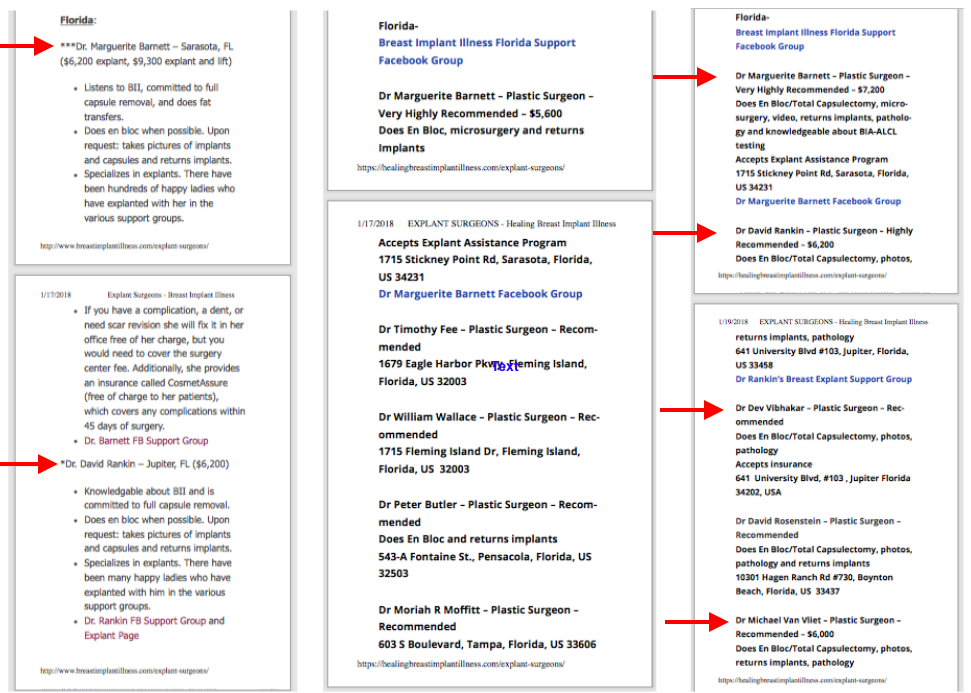 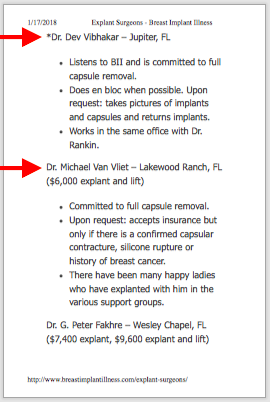 A website’s Sitemap documents the date/time a website’s page was updated. 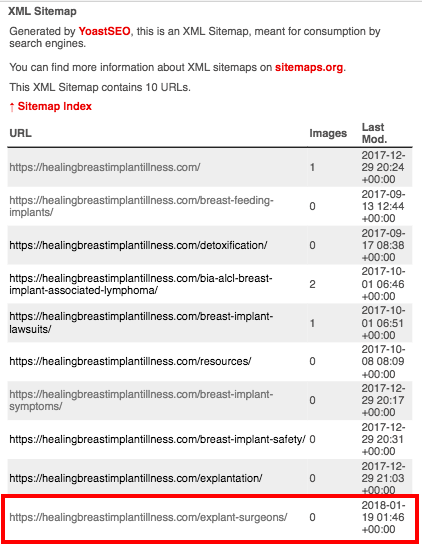 By matching their changes to ours, doing so even in the same day as our changes, they then can say they were copied, when instead we were the original being falsely accused of copying.

The competitor has attacked our website for using Cloudflare stating we “put it behind cloudflare who repeats illegal sites.” She has stated this more than once as part of a social media smear campaign to undermine and discredit us. 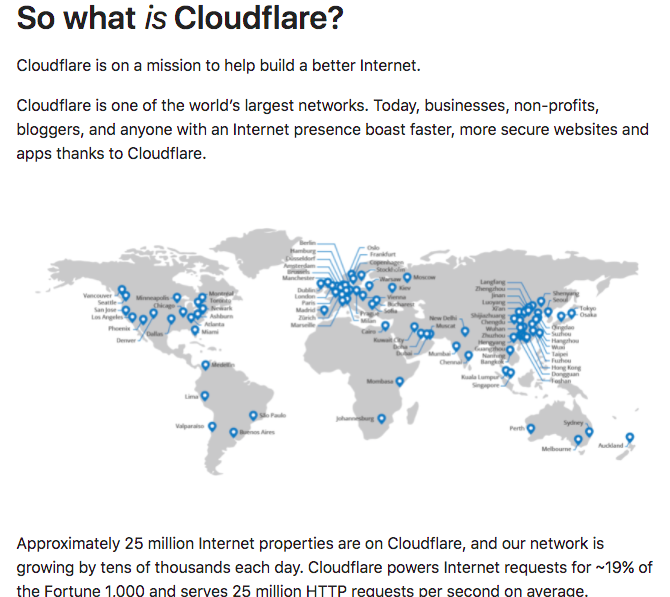 Ironically, despite creating a public negative connotation around Cloudflare with their social media attacks on us, they themselves have later quietly copied and put their website behind Cloudflare as well. It is viewable under ICANN, a website registration database: 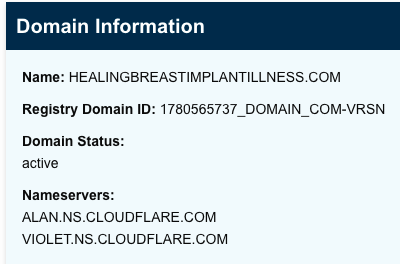