Background: Arthur Brawer, MD, PA is an arthritis specialist whose educational career developed at Brandeis University, Boston University School of Medicine and Boston University Medical Center. For the past thirty-eight years he has maintained a private practice in Long Branch, New Jersey, and has been the Director of Rheumatology at Monmouth Medical Center. He has held the position of Associate Clinical Professor of Medicine at both Robert Wood Johnson Medical School and Hahnemann/Drexel College of Medicine. His research topics include arthritis, alternative medicine, environmentally-related ailments and others, which have been published in multiple peer-reviewed medical journals.

The ASIA criteria (Schoenfeld’s syndrome) has been discredited in 2015 by the special masters (judges) in vaccine court in Washington, D.C., and they will no longer allow it to be referenced by any experts testifying on behalf of vaccine injury claimants. Investigators who utilize the ASIA criteria to define and/or report on silicone toxicity are well-meaning in their desire to verify the existence of silicone-induced disease, but the ASIA criteria will never withstand the white hot lights of scrutiny in any court case litigating this matter. There are at least two dozen mechanisms causing silicone toxicity, virtually all of which disrupt the body’s biochemistry, and virtually all of which have nothing to do with autoimmunity. The ASIA criteria are a gross oversimplification of what is clearly a much more complicated problem, and Dr. Pierre Blais is in agreement with this. You might want to read a 1998 peer-reviewed published manuscript in Medical Hypotheses entitled: “Silicon and Matrix Macromolecules….”

The most recent peer-reviewed manuscript on silicone breast implants was published online (ahead of print) in LUPUS on January 29, 2017, entitled “Destiny Rides Again: the Reappearance of Silicone Gel-filled Breast Implant Toxicity.” Its sister article, also published in LUPUS in 2012, is entitled “Bones, Groans, and Silicone.”

After reading these, you probably will appreciate that:

(1) silicone gel-filled breast implants are indeed quite toxic to the body, and

(2) scientists with a PhD degree in biochemistry need to get involved in the research.

One more thought that you might consider transmitting to your followers. For at least the past seven years virtually every skin product sold commercially has at least two harmful ingredients: (1) silicones, and (2) an emulsifier. An emulsifier allows one to mix together items that ordinarily would not blend with one another (such as oil and water). When placed on the skin an emulsifier temporarily changes the pH to alkaline, thereby temporarily breaking the tight bonds between skin cells and allowing anything on the skin to penetrate down to the subcutaneous fat. That is why makeup, skin softeners, creams, lotions, wrinkle removers, moisturizers, etc. are so popular and effective, because they can tightly adhere to the skin for long periods of time and provide a smooth and glistening appearance. However, as you know, fat cells (adipocytes, or lipocytes) are now the subject of intensive study because they secrete numerous cytokines that can activate a whole host of inflammatory pathways. These activated pathways do not necessarily always cause the “typical” signs of inflammation such as redness, swelling, pain, etc. When items pass through the dermis of the skin and become biointegrated in the subcutaneous fat, a “slow motion” process may result.

First and foremost, I have attached the final version of my mechanisms manuscript that was published four days ago (“Ringmaster”).  As you will appreciate, there is a section that mentions odor and smell hypersensitivity in recipients who have become toxic from their breast implants.  Invariably the silicone-induced illness is well under way before these phenomena appear.  I have been observing this for 27 years, and for an equally long period of time Dr. Claudia Miller has been observing and studying TILT (toxicant induced loss of tolerance) in patient populations that do not have implants.  You can google TILT or you can google QEESI (the survey Dr. Miller uses to identify patients with TILT).  Dr. Miller has been identifying people with vague multi-system ailments that cannot be attributed to any well-defined medical condition and who appear to be environmentally toxic.  She believes that such toxicity is widespread.  Whether other investigators consider these patients to have fibromyalgia or chronic fatigue syndrome or multiple chemical sensitivity (or whatever one wishes to call this), these syndromes were vague and rare 60 years ago and are now vague and common.  Given all the varied environmental exposures, trying to pinpoint one specific cause is frustrating; then, of course, if one identified a culprit, what are the mechanisms by which this toxicity is mediated?  As it turns out, I had an idea about this nearly 20 years ago when I published my first mechanisms manuscript (in 1998 in Medical Hypotheses) entitled “Silicon and Matrix Macromolecules…..”  Since breast implants are just one of 60,000 organosiloxane (organosilicone) compounds synthesized in the past 70 years, I posed that silicone breast implant toxicity might be an extreme form of a general toxicity present in the population at large.  As it turns out, both the World Health Organization and the Harvard School of Public Health are concerned about the worldwide pervasiveness of, and exposure to, innumerable organosiloxane compounds in everyday life,  especially since it is now obvious that these molecules are neither chemically inert nor biologically inert.  Particular attention is being paid to the volatile organosiloxanes, which pose a hazard via inhalation and or dermal absorption.  Indeed, in just the past two years alone numerous chemists have published over 50 articles on this pervasiveness (but no-one has as yet figured out what the mechanisms are for producing illness).  The “Ringmaster” manuscript has attracted attention for its relevance to this quandary.  In the interim, Dr. Miller and I thought it might be advantageous to apply QEESI to women with breast implant toxicity.  BUT – in order for a study like this to be reliable and useful, women would have to fulfill my criteria for diagnosing silicone toxicity in the first place (it cannot just be “assumed”).   There is a big difference in developing TILT de-novo (without having implants) versus developing TILT after a silicone-induced illness is well underway.  I would avoid the terminology “multiple chemical sensitivity.”  I would also encourage your followers to abandon the idea that breast implant illness is an autoimmune problem – it never was an autoimmune problem to begin with (I am assuming you have read three other manuscripts I published, namely “Destiny Rides Again…..,”  “Bones, Groans, and Silicone…..,” and my letter to the editor of Natural Medicine Journal on May 3, 2017 – all three are also attached for reference if you need them).  Lastly I have attached my original articles, “Chronology” from 1996, and “Explantation” from 2000.  In the “Chronology” manuscript, when the disease development curve is extended out 25 years it becomes a dose-response curve (the heart of toxicology). 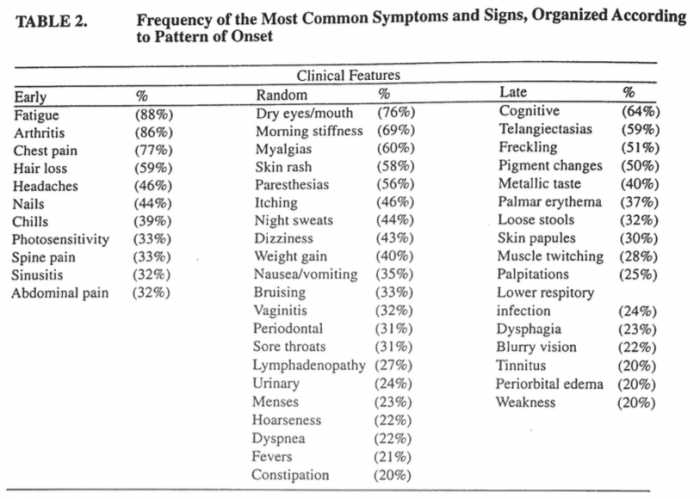